Photo By:  Ashley Peterson is licensed under the CC BY-NC 4.0 license. 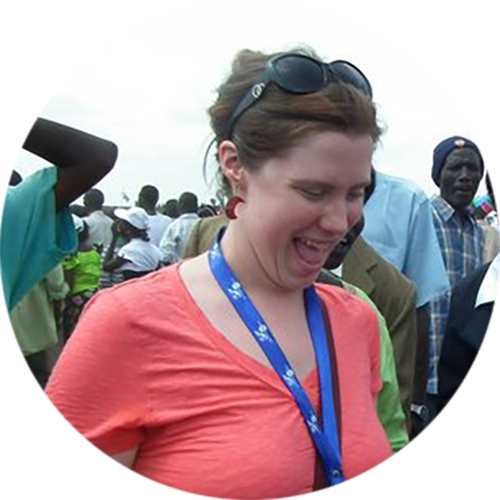 Lea Krivchenia, a Senior Program Manager for Protection at InterAction, considers herself an “accidental humanitarian.” Her love of international affairs and travel began during a high school trip to India. “That was definitely the moment that piqued my interest in the world more broadly, having an experience like that so young,” she says.

While a Women’s and Gender Studies major at Yale University, Lea grew increasingly interested in international affairs and feminist thought in South Asia. Her concurrent involvement in the antiwar movement piqued her interest in the effect conflict has on people and communities. Following graduation, she completed a Fulbright Fellowship in Sri Lanka, looking at the role of women’s groups in conflict settings.

It was during her time in Sri Lanka that Lea was first introduced to humanitarian work. She began volunteering for Nonviolent Peaceforce, an NGO with the goal of protecting civilians in areas affected by armed conflict. She quickly realized her love of field work and accepted a full time position.

Her work with Nonviolent Peaceforce took her to South Sudan to operate a protection program for four years, “where I feel like I really became a true humanitarian,” she says. She then began working with GOAL’sSyria program in Turkey, where she stayed for nearly two years.

Following her work in Turkey and a year supporting humanitarian programs with Project Concern International (PCI), Lea says she “was feeling the need to come back to my roots, looking at protection concerns and focusing on those issues.” This need brought her to InterAction. She believes very strongly in results-based protection: supporting the humanitarian community to work toward protection outcomes. “We as humanitarians should be trying to do what we can to keep people safe, and to support people in their own efforts to stay safe.”

Lea’s humanitarian work has taken her to Sri Lanka, South Sudan and Turkey, as well as to programs throughout the Middle East, Malawi, and Guatemala. She says the best part of her work is seeing its effects. “It’s hard to compete with somebody telling you that you saved their life,” she says. “Working with communities is absolutely the most interesting, fun, and personally rewarding part.”

To young women hoping to help change the world, Lea says: “don’t be afraid of leadership. As much as things have changed for the better, we do live in a world that prioritizes a certain kind of leadership. It’s important to push back against that and recognize that there are a lot of different kinds of leadership that are effective.”