Photo By: Amitava Chandra is licensed under the CC BY-NC 4.0 license.

What Is Next For NGO Aid Map?

Over the past decade, NGO Aid Map has served as a one-stop-shop for tracking the NGO sector’s work around the globe.

In response, InterAction is working to re-design NGO Aid Map from the bottom-up, to explore how this platform can evolve to fit the needs of the NGO sector today, and support the response to global challenges such as COVID-19, climate change, and more. This post serves as an update on progress and learning to date and a call for engagement among InterAction Members to participate in the redesign process.

This work is funded by InterAction’s partnership with the International Fund for Agricultural Development (IFAD), the direct implementation portion of this grant is described in a previous blog post: 5 Questions About InterAction’s Work with IFAD in East Africa

In 2008, InterAction began a new project to map basic info collected from Members on their contributions to the first Millennium Development Goal: to eradicate extreme poverty and hunger. This expanded into a Food Security map in 2009.

The Map took off in the wake of the Jan 2010 earthquake in Haiti. There was a major coordination problem for actors responding to needs on the ground. The basic idea was for The Map to provide current info about where assistance was needed, and which areas of response were already being addressed. The Map showed resource allocation, programmatic activities deployed in Haiti and unmet needs. 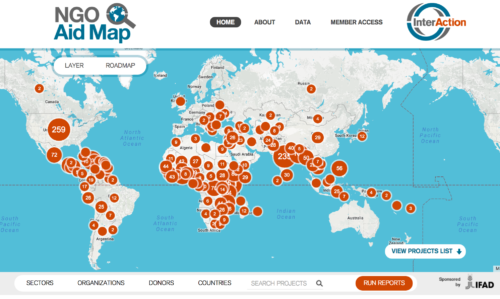 In 2014, a global map was developed, with our first big push to promote “NGO Aid Map” with a redesigned site, expanded project info, and new functionalities.

Since then, both internal and external engagement with the Aid Map has tapered. Member organizations no longer prioritize uploading data as they once did. As a result, InterAction is now working to figure out how to change that or pivot the site to a different use case, one more relevant to today.

InterAction’s design team is using a human-centered design approach to the redevelopment of the Aid Map. Two of the key elements of human-centered design that are important to designing for the social sector are 1) bottom-up engagement with a broad network of relevant stakeholders, and 2) an iterative approach to design based on direct engagement with those stakeholders.

The NGO Aid Map redesign process will take place in three broad phases: discovery, design, and development (also called inspiration, ideation, and implementation, depending on which model you use).

Where Are We Now?

The design team is currently in the discovery phase but will be pushing forward into the design phase soon. The discovery phase involves determining who the key stakeholders are, both internal and external, and learning more about their experience with The Map.

The first stage of this process was to conduct individual consultations with the Member organizations that continue to submit data about their projects to The Map. In December we spoke with nine of these Member organizations and found that Members reported using The Map for a variety of reasons:

The second stage involved individual and group meetings with InterAction internal staff, which highlighted key elements of The Map’s history, as well as opportunities to bring InterAction members into the process in a more substantive manner.

Now, the team will engage InterAction’s Member organizations to learn how The Map can best meet their needs. Should it be a promotional tool? How can it be more visually engaging? Should it more closely track foreign aid funding patterns? We hope you can help us figure this out!

If you’re part of an InterAction Member organization and would like to participate in our April 29th event, RSVP here. Seating is limited!