The 2011 Arab Spring protests and political movements across the Middle East and North Africa (MENA) fell short of transforming the region.

In many instances, the backlash led to or worsened protracted political instability and widespread state- and non-state-perpetrated repression and violence, resulting in significant human rights abuse, displacement, and migration, which continue to date. Corruption, widespread unrest, rampant inequality, gender-based violence and undue impediments to the operations of civil society organizations have stymied longer-term development challenges and opportunities.

Conflict and insecurity have continued to plague the MENA region. Syria and Yemen have a staggering need for humanitarian aid with ramifications from the conflicts affecting much of the region. 13.1 million people in Syria require humanitarian assistance, and over half of the population was forced from their homes. September 2019 was one of the deadliest months for civilians in Yemen, with reports of 388 killed or injured due to the conflict across the country. These conflicts have seen regional and world powers engage directly and support armed groups and governments. Donor governments, seeking to contain violent extremism in a complex and porous environment, have put in place broad counterterror regulations and practices that put increased risk on NGOs implementing humanitarian and development programs in high-risk environments.

Water scarcity also plays a role in the lack of development and escalation of conflict—the region holds the 15 most water-scarce countries in the world. Direct impediments to principled humanitarian action have, in some instances, escalated to direct attacks on humanitarian workers, their facilities, and the civilian population they seek to serve. 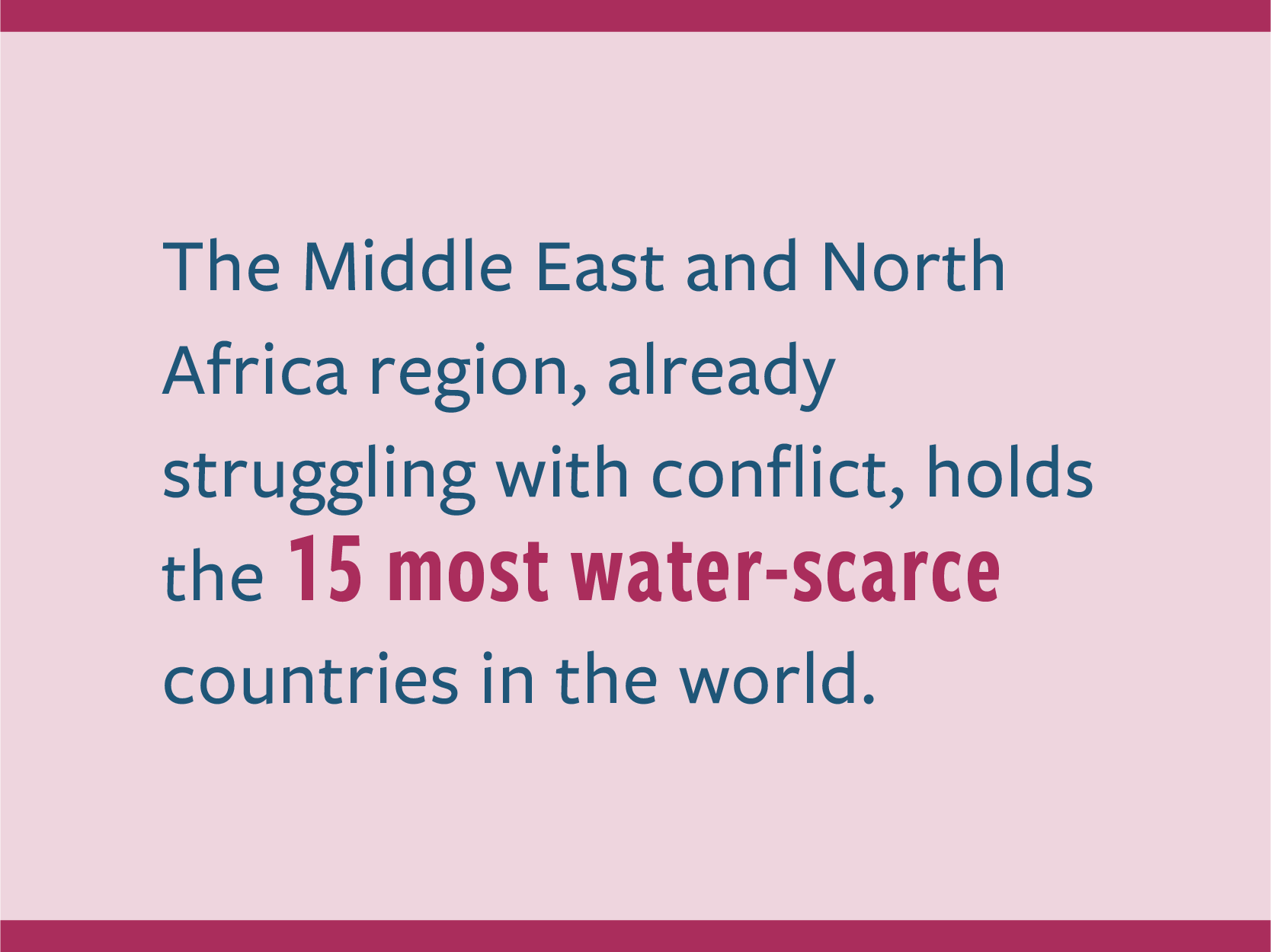 Economic inequality is more pronounced in the Middle East than in any other region in the world, with poverty concentrated in rural areas and a lack of progress on economic and political indicators for women and girls. Indeed, conflicts and authoritarian regimes have held back citizens’ demands for gender equality during the upheavals of the past two decades. Displacement, conflict, and political upheaval across the region create new and additional challenges for inclusive growth, such as a lack of employment rights and opportunities for refugees displaced by the crisis in Syria. Youth unemployment rates have continued to increase, causing shifts in cultural expectations and increased inequality, especially for women whose significant gains in education have failed to translate into employment opportunities.

Global and regional powers have long seen the Middle East and North Africa as a strategic region. While the United States military has had an active presence in the region for decades, Russia is also exercising a more forceful role, including as a party to conflict in Syria, recently occupying former U.S. military installations. Saudi Arabia, the United Arab Emirates, and Iran all have competing interests, coming to a head in Yemen with each regional power supporting differing parties. The long-standing competition between the U.S. and Iran amplifies the potential for greater instability in Iraq and the region.

Ongoing political unrest in the region has also challenged the established order in individual countries, with positive movement in Tunisia and Algeria. In Egypt, a series of repressive leaders have exchanged power in the last decade, including President Abdel-Fattah el-Sissi, who gained control in 2014 and cracked down on civil society organizations. And in Iraq, Iran, and Lebanon, young people in 2019 demanded greater government accountability and transparency, demonstrating that the political turbulence of the region is far from settled.

Below please find one-pagers that offer a deeper look into the Middle Eastern and North African countries where our Members are responding to critical needs: